A man, who was alleged to be a bag snatcher at the Kwame Nkrumah Circle, a popular business hub in Accra, had no alternative than to jump into the polluted Odaw River to save his life after he was caught red-handed stealing.

Narrating the incident, Redeemer Buatsi, who witnessed the situation, said the thief after snatching the handbag passed it over to his accomplice who then bolted with the bag containing a mobile phone, wallet and other valuables.

He added that the thief, after noticing he was being watched, took to his heels and upon reaching a dead-end, decided to escape by jumping into the ‘big gutter’.

All attempts to arrest him in the gutter proved futile giving him the opportunity to walk dangerously to an outlet where a rope was tossed down to him by some people to rescue him.

Take a look at the videos below:

I used to ‘work’ for prostitutes – Shatta Wale [Video] 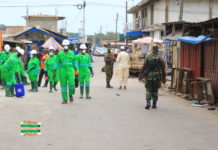 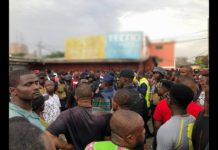