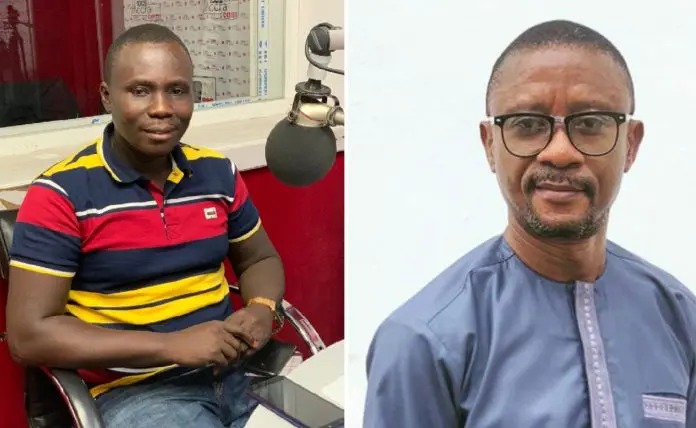 Gospel musician Isaac Show Boy has publicly apologised to his former Producer Ahmed Banda, ‘Bandex’, for disrespecting him years ago.

Isaac, together with his label mate, Cee were introduced to Bandex by musician Great Ampong, but things ended on a sour note.

Consequently, Great Ampong vowed not to work with them until they apologise to their benefactor.

In an exclusive interview on Onua FM, Isaac the ShowBoy said he had no bad blood with his former label until Great Ampong made a statement in an interview that angered him.

“Out of pain, I sent a text message to Bandex. Telling him that I can’t work with him again. I believe that’s what Ampong is talking about,” he said.

The rather unprofessional way of terminating their contract made his bosses wash their hands off his career.

Great Ampong recently told the media that he will not work with former label mate Isaac the Showboy because he (Showboy) has a feud with Bandex, and until ShowBoy apologises to their boss, he’s not working with him.

After listening to Ampong in a phone-in interview, Isaac has finally expressed remorse and apologised to Bandex.

“So Bandex, if you are listening to me on the radio now, what I can say is, if the pain of the message I sent is still in you, I’m your son. If not for anything you’ve fed me before, Alhaji Bandex. I am on my knees. Forgive me.

“Papa, wherever you are, forgive me. Tomorrow, I will come to your house and settle everything with you amicably,” Show Boy soberly apologised.

Isaac the Show Boy is a product of the first edition of TV3 Mentor and was promptly signed by Alhaji Banda’s record label Bandex production alongside Cee. Isaac the Showboy is out with three new songs.