Former First National Vice-chairperson of the National Democratic Congress (NDC), Anita Desoso, has described as bad timing the release of the controversial book ‘Working with Rawlings’ by Professor Kwamena Ahwoi.

According to her, the contents of the book are creating division in the party which is working hard to return to power.

“The timing for the release is wrong so I won’t waste my money to buy it,” Madam Desoso stressed.

The outspoken former NDC National Women’s Organiser bemoaned what she described as an agenda to destroy the integrity of former President Jerry Rawlings.

“No matter what Mr Rawlings helped all of us. I’m very disappointed in Prof Ahwoi,” she bemoaned.

On the way forward, she urged all NDC members not to discuss the contents of the book and rather focus on winning the December elections. 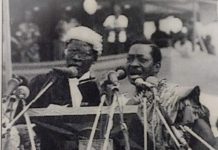 Audio: What my “kneeling before Rawlings” did to NDC – Anita Desoso