A former First National Vice-chairperson of the National Democratic Congress (NDC), Anita Desoso, has joined the clarion call for an overhaul of the party’s leadership.

According to her, there must be a total overhaul at all levels of the party.

“We must change our executives from the branch, national level and the leadership in Parliament especially. Some people have been there for too long and the time has come for new faces to emerge,” she said on Asempa FM’s Ekosii Sen.

Madam Desoso bemoaned people have worked tirelessly while others have sacrificed their lives for the success of the party.

On the backdrop of this, they cannot sit aloof to watch the party deteriorate.

She added the party must ensure they go for congress early if possible, before the stipulated time to give the new executives adequate time to work towards their victory in 2024.

“I want to use this opportunity to issue a stern warning to people who will try to influence delegates with sewing machines, money or any other thing. We will seize them and hand the people over to the police,” she cautioned.

There have been agitations from some members of the NDC following the approval of President Nana Akufo-Addo’s ministerial nominees by Parliament.

The party’s General Secretary, Asiedu Nketia, has appealed for calm, stating the approval was based on consensus.

However, calls have intensified for the leadership of the NDC in Parliament to be changed.

Parliament resumes sitting on this date… 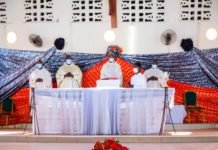