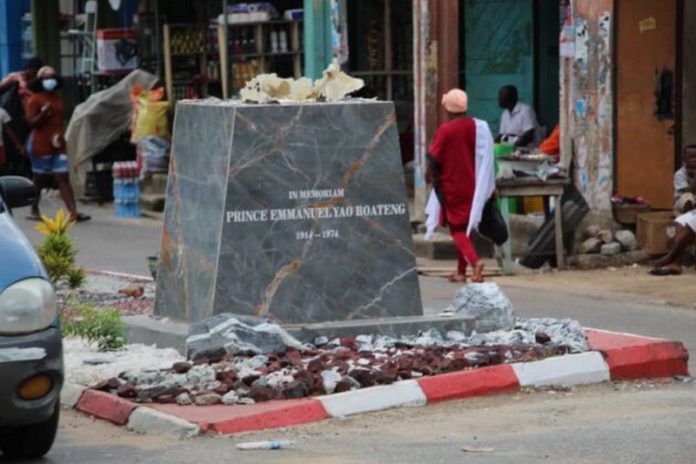 The family of  the late Oheneba Yao Boateng has given the paramount chief of the New Juaben Traditional area a 14-day ultimatum to replace a statue he demolished at Prince Boateng Roundabout in Koforidua, the Eastern Regional Capital.

They are threatening to seek legal action against the Overlord of the area if he fails to replace the bust and restore all beautification works at the premises.

Daasebre Prof. (Emeritus) Oti Boateng and the New Juaben Traditional Council caused the bust, which was erected in honour of Oheneba Emmanuel Prince Yao Boateng, to be pulled down on March,19.

According to the Traditional Council, the statue was erected by children of the late royal without the permission of the Omanhene of New Juaben Traditional Council. They described the action by the family as gross disrespect to the Yiadom Hwedie stool.

The Council described the statue  as ” offensive and dirty trick “.

The Council said the decision to forcibly pull down the statue was necessitated by failure by the children of the late Boateng to remove the statue having promised and apologised when summoned to the palace on February 5, 2021, by the Traditional Council.

However, in a letter to the Traditional Council and copied the paramount chief and the New Juaben South Municipal Assembly, Osafo Adu-Amankwah, solicitors for the family described the move as illegal.

“Your destruction of the bust and your subsequent press release explaining your reasons for the above-mentioned destruction is absolutely illegal even if the bust is offensive to you. If an Assembly grants a permit for a physical development and same is carried out, if there are issues that call for destruction or demolishing, there are laid down procedures by the law that one ought to follow which your office should be aware of.”

Find below the full letter requesting the Paramount chief to replace the statue:

RE: PRESS RELEASE ON THE REMOVAL OF OHENEBA YAO BOATENG’S STATUE BY THE NEW JUABEN TRADITIONAL COUNCIL

We write as Solicitors for and on behalf of THE CHILDREN, NEPHEWS, NIECES AND GRANDCHILDREN (AHENENANANOM) OF THE LATE OHENEBA (PRINCE) EMMANUEL YAO BOATENG (Client) for whom we so act.

Our Clients inform us generally of facts in respect of the above subject and the erection of the bust of the late OHENEBA (PRINCE) EMMANUEL YAO BOATENG at Prince Boateng roundabout in Koforidua. They have further instructed us to respond to your press release dated 23rd March, 2021 on the subject as follows;

1. Our Clients presume that your Press release was at the direction of the Traditional Council particularly its President Daasebre Professor Emeritus Oti Boateng.

2. During the lifetime of the late Oheneba Yao Boateng, he was generally known and called PRINCE EMMANUEL YAO BOATENG.

3. The fact that Oheneba Yao Boateng was the son of Nana Kwaku Boateng I (Omanhene of New Juaben from 1913-1930) and Nana Kwaku Boateng was the son of Nana Ama Serwaa; who is the ancestral root of the Yiadom Hwedie royal stool of New Juaben Traditional area is not in dispute. The Akan customary practice and usage pertaining to such an individual and his progeny with respect to customary rights and responsibilities are also not in dispute.

However, it is a well settled Akan customary practice and usage that Oheneba Yao Boateng and his progeny are referred to as Oheneba and Ohenenananom respectively and belong to the royal family albeit with their established customary rights and responsibilities.

4. The location in Koforidua known and called by all as Prince Boateng roundabout is notorious to sundering for decades. The late Oheneba Yao Boateng settled at that location beginning from the late 1930’s and even after his death his contribution and influence in that environs are again notorious. The name PRINCE BOATENG ROUNDABOUT evolved naturally from the general public as political authorities developed the said roundabout.

5. During the lifetime of Oheneba Yao Boateng he was enstooled as Ahenemahene, a stool he occupied until his passing sometime in 1974. His contribution to the traditional area is well known. It was during his reign as the Ahenemahene that there was absolute peace and understanding among the Ahenemma and the youth of the traditional area that led to the renovation of the palace for the Omanhene and many other developmental activities in the traditional area. He was also a philanthropist who assisted in diverse ways including affording individuals to obtain formal education in the traditional area. It is therefore not true that Oheneba Yao Boateng has not done anything tangible for the New Juaben State to merit an erection of a bust in his honour and it is also disingenuous to characterize our Clients as having taken an extremely self-serving and inward-looking decision to erect the bust as the entire process before the erection of the bust was subjected to laid down procedures and requisite legal regulations.

6. Beyond New Juaben Traditional area, his influence and achievements in the Republic of Ghana include being a Member of Parliament in the first Republican Parliament, President of the Ghana Boxing Association (GBA) who was instrumental in bringing the Great Mohammed Ali to Ghana in the 1960’s which singular act has impacted on the development of boxing in Ghana till date, a public servant serving as Ghana’s Ambassador to Brazil, just to mention a few.

7. The question in issue is not the lineage of the late Oheneba Yao Boateng or his progeny, their rights and responsibility within the Yiadom-Hwedie royal family, the issue has to do with the naming of a landmark on a public space, physical development in a specific area and the authority that regulates these matters. To the above issues, all public spaces and naming are vested by law in Municipal District Assemblies (MMDAs), in this instance the New Juaben South Municipal Assembly. Again, regulating physical planning and development within any district is solely the mandate of District Assemblies (New Juaben South Municipal Assembly), therefore, it is entirely misplaced and a lack of understanding of the law to suggest that the New Juaben Traditional Council ought to have been consulted and same granting permission before such a physical development can be undertaken since they have no such powers under the law.

Again, naming of streets and landmarks in public spaces is not reserved for royals and natives of a particular traditional area. It is trite that several landmarks and streets across the Republic of Ghana are named after non-indigenes even including foreigners but in this instance, we are referring to an individual who was a member of the royal family, a former occupant of a stool within the traditional area.

8. The powers of Houses of Chiefs and Traditional Councils under the Constitution and Chieftaincy Act are purely in respect of matters pertaining to Chieftaincy and promotion of good customary laws and ethics across the Country.

9. Kindly be informed that the New Juaben South Municipal Assembly, after going through its processes under law, on 21st December, 2020 issued a permit to our Clients to undertake the beautification and erection of a bust in memory of Prince Boateng (Oheneba Yao Boateng). After the granting of the permit, our Clients paid a visit to the offices of the New Juaben Traditional Council to officially inform Nananom through the office of the Council of the project which was about to be undertaken. On the said day, one Madam Priscilla Odoi was the officer in the office of the Traditional Council and after our Clients stated the purpose of their visit, she intimated, which is supported by the law, that since the New Juaben South Municipal Assembly had granted permit for the project, Nananom shall be informed of the project. The said visit was purely out of deference to Nananom.

10. When the New Juaben Traditional Council summoned our Clients in respect of the erection of the bust of the late Oheneba Yao Boateng, they appeared before the Traditional Council purely out of deference to Nananom as they themselves are Ahenenananom. The Akan customary practice and usage you alluded to in your press release dictates that when young ones are summoned before elders and questioned on matters that they may be right or wrong apology from the young ones is the first step to the dissolution of the matter. Therefore, the apology before Nananom upon their summons was purely in accord with custom and respect to Nananom but not to admit any wrongdoing.

11. Kindly be informed that our Clients did not produce any audiovisuals to be circulated within the traditional area, Ghana, and/or abroad regarding the unveiling of the bust of Oheneba Yao Boateng which bust is not offensive in any shape or form.

12. Our Clients welcome the idea that similar memorial must be done in memory of Nana Kwaku Boateng I and are willing to support such a laudable idea.

13. Your destruction of the bust and your subsequent press release explaining your reasons for the above-mentioned destruction is absolutely illegal even if the bust is offensive to you. If an Assembly grants a permit for a physical development and same is carried out, if there are issues that call for destruction or demolishing, there are laid down procedures by the law that one ought to follow which your office should be aware of.

14. Our Clients instruct us that they are not interested in embarking on any steps to seek any legal remedy, however, your office is required upon the receipt of this letter and within fourteen (14) days to replace the bust and restore all the beautification work at the said location (Prince Boateng Roundabout) that has been destroyed by you. Failure to do so will then force the hands of our Clients to seek legal redress.

Notice is hereby given. You are advised accordingly.