The ‘Satan Shoes’ appears in the rapper’s controversial new ‘Montero (Call Me By Your Name)’ video.

The billion-dollar shoe brand is reportedly filing a lawsuit against MSCHF for misleading buyers into thinking Nike approved the shoe when it was actually a customisation done by the art company and Nas X.

According to a report from TMZ on Monday (March 29), Nike claims that they didn’t authorise the reworked sneaker Lil Nas X dropped in conjunction with MSCHF to accompany the release of his single ‘Montero (Call Me By Your Name),’ which arrived last Friday (March 26).

Nike reportedly says they are “in no way connected with this project.”

The sneakers appear in the video being worn by the Satan actor, which can be seen beginning at the 2:27-mark of the visual.

Nike is suing MSCHF for trademark infringement because their signature Swoosh logo is featured on the Satan-inspired shoe.

The company is seeking damages and wants all sales from the shoe to be blocked from Lil Nas X.

On Monday afternoon, a rep for Nike confirmed the lawsuit against MSCHF to XXL.

“Nike filed a trademark infringement and dilution complaint against MSCHF today related to the Satan Shoes,” the statement reads.

“We don’t have any further details to share on pending legal matters. However, we can tell you we do not have a relationship with Lil Nas X or MSCHF. The Satan Shoes were produced without Nike’s approval or authorisation, and Nike is in no way connected with this project.”

Meanwhile, Lil Nas X apparently caught wind of the Nike lawsuit and posted a short clip on his Twitter page from an episode of Nickelodeon’s Spongebob Squarepants, featuring the character Squidward begging for spare change.

The artiste captioned the clip: “Me after the Nike lawsuit.” 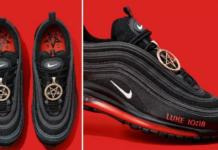