Lil Nas X, the ‘Old Town Road’ artist, is collaborating with the streetwear company MSCHF on a pair of ‘Satan Shoes,’ only 666 pairs of which will be on sale Monday.

The controversial kicks — apparently modified Nike Air Max 97s — are decorated with a pentagram pendant and a reference to Luke 10:18, a Bible verse about Satan’s fall from heaven. They’ll be sold for $1,018.

The sneakers also contain a drop of human blood in the sole, drawn from members of the MSCHF team, the company told NBC News on Sunday.

News of the shoes drew outrage over the Palm Sunday weekend; some critics slammed both Lil Nas X and Nike.

But Nike was quick to distance itself from the shoes, pointing out that they’re custom adaptations of existing products.

“We do not have a relationship with Little Nas X or MSCHF,” Nike said in a statement. “Nike did not design or release these shoes and we do not endorse them.”

MSCHF previously released a pair of modified Nike Air Max 97s called the ‘Jesus Shoes,’ which contained what it described as holy water in its sole drawn from the River Jordan.

The release of the ‘Satan Shoes’ coincides with Lil Nas X’s latest single, ‘Montero (Call Me By Your Name),’ and its accompanying music video.

In the video, Lil Nas X is seduced out of what appears to be the Garden of Eden, falls into hell and gives the devil a lap dance.

The music video has been viewed more than 29 million times since its release Friday.

While holding the sneaker, Lil Nas X begins speaking, and before it gets to the advertised apology, the video cuts to the clip from ‘Montero’ of him giving the devil a lap dance.

He also tweeted a defense of the shoes Sunday.

After the release of the song Friday, Lil Nas X put out an open letter to his younger self about coming out. The rapper, who is openly gay, explained that the song was about a guy he met last summer.

The music video for ‘Montero’ includes a voiceover with a similar message.

“In life, we hide the parts of ourselves we don’t want the world to see,” he says. “We lock them away. We tell them, ‘No.’ We banish them. But here, we don’t. Welcome to Montero.”

Lil Nas X first appeared to come out in a tweet in June 2019, on the last day of Pride Month, after the chart-topping success of ‘Old Town Road.’

He pointed out a rainbow building on the cover of his album, ‘C7osure,’ and said, “Deadass thought I made it obvious.” 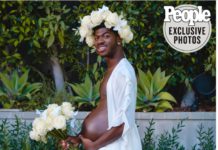 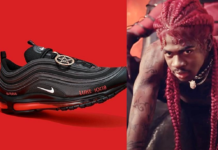