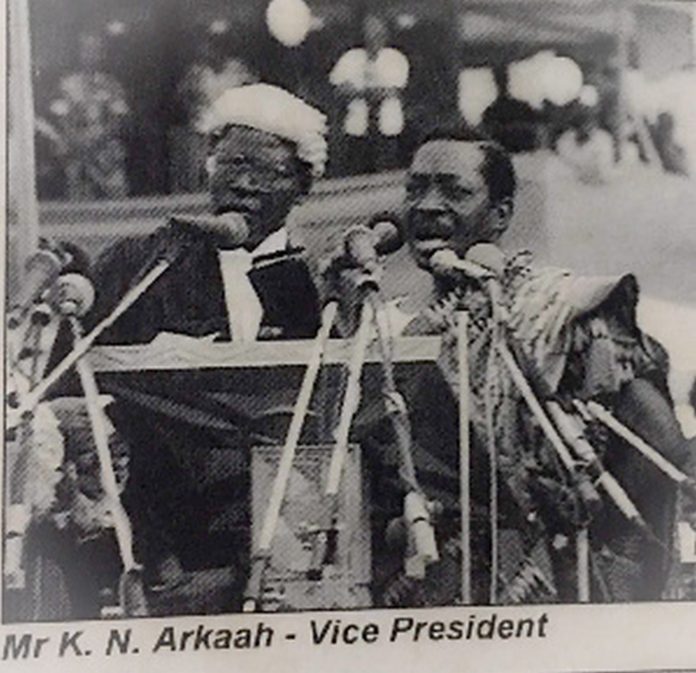 Late Vice President of the Republic of Ghana, K.N. Arkaah could not resist young beautiful girls. This is according to Professor Kwamena Ahwoi in his book, ‘Working with Rawlings’, which has ruffled feathers within the opposition National Democractic Congress (NDC).

According to the book, Veep Arkaah, who had a frosty relationship with his boss, Jerry John Rawlings, had a very “slippery zip” and therefore couldn’t resist young beautiful girls at the presidency.

Page 116 of the book recounted: “Even as Vice President, it was always whispered ‘behind closed doors’ that young girls, especially the beautiful ones, were Arkaah’s weakness. Jemima Yalley was one such beautiful young girls. She was an ex-secondary school girl who had gained notoriety in school for dating older men. So when she and Vice President Arkaah allegedly encountered each other on the staircase of Kingsway Stores in Accra, sparks were bound to fly.”

“An affair apparently ensured, and this made its way into the print media, with Jemima Yalley giving a graphic account of how the Vice President had lured her into his office and sexually harassed her. Vice President Arkaah, on his part, accused the NDC of setting Jemima Yalley up with him, an allegation that gained some credibility when it turned out that she was the niece of Sam Pee Yalley, a leading member of the NDC in the Central Region and a former Municipal Chief Executive of Cape Coast.

“Arkaah himself never personally denied the affair and the print media lapped it up with joyous abandon. Unable to defend Arkaah, the NDC Government’s relationship with its Vice President started on a downward spiral. With Arkaah not denying the young lady’s accusations, it appeared as if the battle lines were drawn between the NDC, Jemima Yalley and the media on the one side, and Vice President Arkaah on the other side.”