A motorcyclist believed to be in his late 30s lost his life in an accident involving a fuel tanker on the Sofoline-Abuakwa highway in the Ashanti Region on Thursday.

According to eyewitnesses, the incident occurred after the deceased who was riding a motorbike got trapped under the fuel tanker while using the road and was later run over by the vehicle, thereby killing him instantly.

Eyewitnesses say, although the driver of the vehicle stopped to observe the happening, he later allegedly fled the scene after realizing that some youth were approaching his direction with different weapons to attack him.

“What happened was that my vehicle was faulty, so I was sitting down thinking about how to get it fixed. That was when I saw the fuel tanker and the motorbike approaching. All of a sudden, I saw the motor rider trapped under the tanker truck, and we just saw that the tanker truck had run over the man and crushed his head.”

“The tanker driver drove ahead to park at the traffic light area. It was then that some of the boys around started rushing towards the tanker driver with canes and other weapons.

“So, fearing for his life, the tanker driver ended up fleeing the scene. As for the deceased, he died instantly when we rushed to check on him,” an eyewitness, Kofi Yeboah, said.

The body of the deceased who is yet to be identified has been deposited at the Komfo Anokye Teaching Hospital (KATH) pending an autopsy. 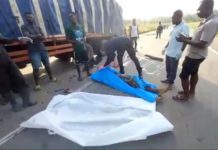