“I watch a lot of football, I am a Liverpool fan but Asante Kotoko is my favourite and I want to be chairman of the club one day.”

These were the words of OkaiKwei North Member of Parliament (MP), Patrick Yaw Boamah, when he sat for an interview with Adom TV’s Afia Amankwa Tamakloe on M’ashyase3.

Though little is known about his interest in football, the MP, who is a lawyer, noted that he has been working behind the scenes for some time now.

Without giving any timeline, he noted that he wants Kotoko to reach an international standard like Real Madrid, Liverpool, Manchester or Chelsea.

However, he did not state why he wants to compete for the chairmanship position.

As a go-getter, he expressed optimism he can secure the position once he sets his mind to it. 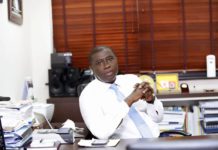 From a ‘stubborn boy’ to astute lawyer, politician – The story of Patrick Boamah