Highlife legend, Pat Thomas, is the latest Ghanaian musician to have his music cross the borders of the country.

Marvel Universe, in their new series ‘Loki’ featured the legendary musician’s ‘I Can Say’. The song was featured in the opening credits of the final episode of the series.

In the opening credits, which featured iconic quotes, a short snippet of Pat Thomas’s music ‘I Can Say’ was placed between Pyotr Ilyich Tchaikovsky’s music from ‘Swan Lake’ and Beethovan’s ‘Fur Elise’.

The Legendary Highlife artiste released the song in 1976 alongside the Marijata band. ‘I Can Say’ is the penultimate song on the nine-song album ‘Pat Thomas Introduces Marijata’.

This was brought to light after breakdown expert, Eric Voss, in his new video on the YouTube Channel New Rockstars noted some of the iconic features in the opening credits.

Some of the quotes were music from Swan lake, Beethovan and Helen Forest and Harry James (It’s been a Long Long Time), Nina Simone, Pat Thomas and others.

Because Pat Thomas’ was a few seconds long many people might have missed it on the first watch. During the rolling credits, Pat Thomas alongside the others were credited.

This, however, is not the first time a Ghanaian musician has had a song featured in a movie.

In December, a remix of one of Bisa Kdei’s songs was used as a soundtrack in Netflix’s 2020 Christmas movie Jingle Jangle.

The song written specifically for the movie is a remix of his 2018 hit ‘Asew‘.

The song and all other tracks on the movie were nominated for the 2021 National Association for the Advancement of Colored People (NACCP) Awards. 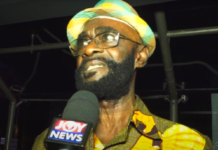