A 25-year-old Senior High School (SHS) graduate, Memphis Abdul Rasheed, who left school as a drug addict has been jailed for terrorizing and robbing unsuspected persons.

He confessed to Crime Check TV GH of using a knife to undertake his robberies, which was his main occupation.

Rasheed said whiles in school, his school father who was a drug dealer and also an addict introduced him to weed smoking. He said he became addicted and sometimes failed to attend lessons because he had smoked.

He said one day his teacher found him sleeping in the dormitory during lesson hours after smoking heavily and drinking weed [marijuana] tea.

The concerned teacher reported him to his parents about his smoking attitude.

The now free convict said his parents advised him on several occasions to quit but he turned a deaf ear to their counsel now he regrets his actions.

“My school father sold weed in the bush where we had everything there including utensils and cooking stoves so after smoking we cook and eat there. My school father could smoke five rolls of the substance whiles I take three rolls. My parents even tried to disown me unless I stopped smoking but I was addicted and did not heed their advice,” he said.

Rasheed said after he completed school, he advanced from smoking to sniffing cocaine and abusing other drugs including tramadol and ‘D-10’ when he met some friends at Kumasi in the Ashanti Region. He was then introduced to armed robbery.

“After a day’s robbery, we come back to the ghetto and give the stolen items to the gang leader who will give us our share. We usually do not present all the items. We hide some for ourselves,” he added.

Rasheed who had a huge scar on his hand said, his ghetto senior nearly slashed off his hand when they faced off with each other.

How he was arrested

In an operation, which ended his robbery career, he said he robbed a lady of her mobile phone but unfortunately, the victim was his neighbor, and was able to identify him.

He said the lady reported him to the police and he was arrested.

Rasheed said he was put before the court and was fined One Thousand Two Hundred Ghana cedis. He said he defaulted in paying the fine and was jailed for twenty-four months.

Narrating his experience in prison, Rasheed said the chime for them to go to bed at 4:30 pm breaks him down. He was bitter about the food served to inmates and their sleeping arrangements gives him reason to repent.

Luck dawned on him when Crime Check Foundation (CCF), chanced on him at the Manhyia Prison in the Ashanti Region.

CCF paid his fine with the contributions of its donors, US-based Victoria and Felicia.

He was thankful for the support and promised to turn a new leaf. 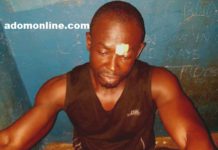