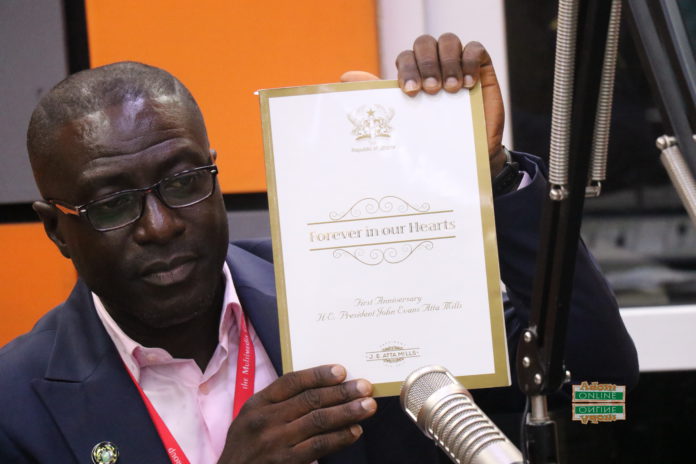 It has emerged that, copies of late President, John Evans Atta Mills’ Book of Condolence is rotting away years after his death.

According to reports, about 150 boxes containing the farewell messages to the late president are packed at the Atta Mills Presidential Library which has now become a ‘White Elephant.’

On the anti-corruption segment of the show dubbed Fabewoso, he bemoaned how the people who claimed to love late Atta Mills are not protecting his legacy.

In a rebuttal, the deputy Communications Director of the opposition National Democratic Congress (NDC), Mr Kwaku Boahen said they did their best to protect the legacy of late Mills.

He cited how annually they hold lectures in honour of the late Professor who served both Ghana and the NDC.

Mr Boahen blamed the government for the sorry state of Atta Mills’ final respecting place, Asomdwee Park, but stressed that the NDC will take steps to upgrade the facility.

He said nothing stops the NDC from ensuring Asomdwee Park is kept clean if indeed they cared for the late Mills.

“I’m sure late Mills is turning in his grave now because his own people have neglected him,” he stated in Twi.