Despite the anomality, the NPP insisted their figures, which were on the higher side, be used, but the official declined, leading to skirmishes.

In the course of the misunderstanding, bullets were shot into the crowd, forcing the observers to disperse in fear.

Minister of Transport, Kwaku Ofori Asiamah, together with the District Chief Executive and incumbent Member of Parliament, Nsowah-Djan stormed the scene to restore calm.

However, the EC maintained its stance that the parliamentary candidate on the ticket of the NDC was leading in votes. 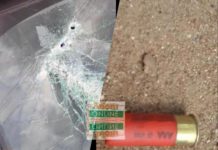