A survivor of the Church of Prosperity collapse at Akyem Batabi has recounted the horrifying incident.

The church in the Asene-Manso-Akroso District of the Eastern Region collapsed on Tuesday, October 20, 2020.

The woman, who gave her name as Yaa Mansa, explained she is a resident of Swedru and had been a member for the past 33 years.

Miss Mansa, aged 58, explained that she started going to church when her son, who is now a soldier, was five years old.

“I washed on Tuesday when we were going for prayers and someone came for my clothes so I was talking and decided to go and throw them away.

“I sat on the bed and when I got up, I realised the building was about collapsing but before I could get out, everything came down and I went inside,” she narrated in an interview with Adom News.

According to Madam Mansa, she was sure she was going to die due to the intense heat beneath the debris “but I could hear the sound of the excavators and voices.

“It felt like there was a fan beside me but I was really suffering hoping I would be rescued while I prayed to commit my soul into God’s hands.”

She is currently responding to treatment in a health facility in the area.

Meanwhile, the death toll in the church building collapse has risen to 16 with a total of 23 victims retrieved as of Wednesday evening.

More victims are expected to be extricated as rescue operation enters the third day. 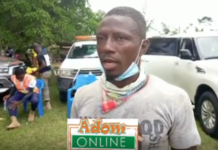