Ghanaian comedian, Afia Schwarzenegger, has told movie stars in the country to go help Emmanuel Armah, another ailing colleague of theirs.

Her call on the fraternity to help the ailing actor follows assertions by some Kumawood actors that their kind gesture of wanting to financially support the now deceased actor, Bishop Bernard Nyarko was rejected by his family.

The comedian, who seemed peeved at the hypocrisy in the movie industry, called on the same actors to offer the ‘help’ they wanted to give Bishop Nyarko to Mr Armah.

Mr Armah has been bedridden for years after suffering from a stroke in 2017. In January this year, some colleague actors and actresses paid him a visit in his home.

Photos taken with the actor and shared on social media platforms revealed the drastic weight loss of the actor.

In his peak in the movie industry, Mr Armah starred in hundreds of movies, notable among them were: Eating With the Devil, Every woman Wants Me and Deadly Mistake.

Photos of the ailing actor: 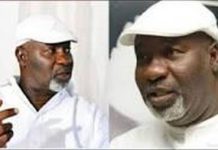