It’s been months of a never-ending drama and power play between the Member of Parliament for Assin Central constituency and the Founder and Leader of the International God’s Way Church.

Kennedy Agyapong has branded Bishop Daniel Obinim as broke and untrustworthy which was the reason his bail was delayed for days.

And in his latest interview, Mr Agyapong said he is richer and has more houses than the preacher.

According to him, he has over 130 houses and has given out 30 as gifts to women so Bishop Obinim cannot compare his 30 houses to him.

“You have 30 houses?” he asked Obinim. “The number of houses I have gifted women are more than 30.”

He went on to jab him and claimed God will use him to bring down Obinim.

Watch the full interview above: 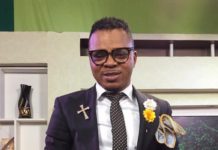