Rapper Yaa Pono has reacted to a video of Shatta Wale saying Hiplife grandpapa, Reggie Rockstone hasn’t made any impact in Ghana.

In the video, Shatta Wale said Ghanaian leaders don’t pay mind to rap music but rather listen to highlife, adding that, the originator of rap music in Ghana, Reggie, made no impact with his career.

According to Shatta Wale, Reggie as a trailblazer in the industry then lied his way to fame, hence rappers who follow him are towing his fake legacy.

Ponobiom posted a snippet of a new song he is yet to drop and fans speculated it will be directed at Shatta Wale per the caption: 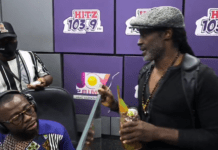 ‘Working with Rawlings’ hurt Rawlings so much – Close associate reveals