Musician Coded of the 4X4 music group fame has recounted what led to the vibrant trio taking a long hiatus which eventually caused the group to get out of the music scene.

In an interview on Daybreak Hitz on Hitz FM, Coded said two of the members decided it was time for them to go solo even though, he, Coded, was against the decision.

He explained that, all efforts to cause the team to stick together and maintain their relevance as 4X4 didn’t work out because Captain Planet and Fresh Prince wanted to be on their own badly.

“We had a meeting as 4×4 that we were going to do out solo projects. At the meeting I was the odd one who wasn’t for the motion. I told them I think the group wasn’t doing too well so going solo won’t help the brand 4×4…

“I told them that we had to push the brand to the top so when they put up their singles it will fly. But the two of them were okay with the solo project so around the same time I also didn’t release a project till I made a decision that I will come out with my ‘E Dey Pain Them song.”

Coded added that, they were better off as a music group but his team members wanted to work on themselves.

“I didn’t second it coz I think we had to put our acts together. There was no argument… I really tried to talk it out with them but they were good for the solo projects.

“We were all writing the songs. If anyone got a chorus we put it together. That’s how it was,” he explained.

Meanwhile, Coded has urged Ghanaians to expect a new song from him and Captain Planet in no time.

According to him, they have been in talks and it is certain they will give Ghanaians the shock of a banger soon. 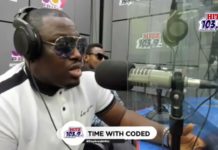 4×4’s Coded on why he doesn’t feature artistes

VIDEO: I don’t know if the clothes I wear are original or fake – Coded of 4×4

Coded of 4×4 spotted modeling after near fatal accident