The Homeland Study Group Foundation (HSGF) has denied knowledge of some 21 people arrested at a training camp at Kpevedue and Fievue, a twin community on the Ghana-Togo border in the Ketu North Municipality of the Volta Region.

The Foundation says it has never engaged in any act that will or could disrupt public peace and order since its 26 years of existence from July 5, 1994 at Kedjebi.

The group says it is worried about how Ghana has handled issues concerning its activities, especially when they have been law-abiding and have always subjected themselves to the laws of the land.

In a statement issued by the Deputy Public Relations Officer of the Foundation, George Nyakpo, the group cautioned against the continuous arrest of its members or persons purported to be aligned to the Foundation.

The statement said such arrests by the military of the police would give rise to rebels infiltrating the group.

“This continuous tagging of the HSGF and making a mountain out of a molehill will cause more confusion and retaliation if the HSGF had not been exercising more and better political maturity,” the statement said.

“We also like to inform the General Public that in the interest for Peace to prevail in Ghana, the military and the Police should stop the needless arrests that are on-going so as not to give an opportunity to any rebels to infiltrate,” the statement further advised. 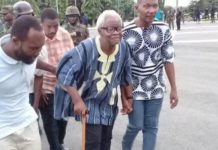