General Secretary of the National Democratic Congress (NDC), Johnson Asiedu Nketia, has dared the media to go to the alleged training camps at Asutuare if they are in doubt.

“The media can go there to capture what they are doing to prove what I am saying, there are training camps at Asutuare, Eastern region and other various centres, if you doubt us, go to the training centres to see for yourselves,” he said.

He made this assertion during an interview on Joy News’ evening programme PM Express, monitored by Adomonline.com.

Mr Nketia further claimed that, most of the individuals working in the States security agencies were members of the New Patriotic Party’s vigilante group, Delta Force.

When quizzed about what the NDC was doing to stop it by the show’s host, Evans Mensah, Mr Nketia said the evidence they (NDC) have obtained, will be taken to the court of public opinion and in doing so, they were doing their part to ensure stability in the country and urged Ghanaians to take the development serious, as matters of security should be everyone’s concern.

“It is the interest of everyone that our democracy will be protected because leaders are chosen by the will of the masses, any compromise of the voting system affects everybody irrespective of whom you vote for. Voting must be free and fair and when the people decide on a leader, their decision should prevail, so any attempt to subvert the will of the people must be the concern of everybody,” Mr Nketia said.

“We will do whatever it takes to discourage and discontinue that type of activity, and I don’t believe it is the sole responsibility of the NDC but the media as well,” he added. 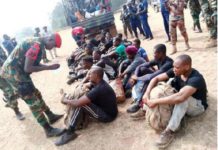