Following the intolerable behaviour of some final year students that went viral on social media, many educationists have called for a proper, strict and realistic measures.

This they believe will help to curb, resolve and restructure both formal and informal education systems in the country.

One of such is Dr Henry Godson Afful, a Ghanaian educationist, author and musician in the United Kingdom.

Dr Henry Afful has attributed the circumstances confronting the youth in our schools today to being a vivid reflection of a bigger problem in society that needs to be tackled with all the seriousness it demands to secure the nation’s future it deserves before it gets out of hand.

In his perspective, there is an urgent need to correct this social ill because it stems from unhealthy attitudes exhibited by people in especially, political positions and other ranks of trust who undermine the integrity of their opponents to win power at all cost.

“When they see the way some of our politicians and people in positions of trust behave in the media space, they tend to follow such and perceive them as right,” he added.

He therefore emphasized that disciplining these students would be in the interest of sanity and peace and security of the nation and serve as a deterrent so others do not tow these same lanes in the years to come.

He also proposed that it would be essentially right to address national issues in context without reading politically motivated meanings into them as the they deny us the ability to set prioirities straight whereby derailing the essence of morality.

“It’s unfortunate almost every issue in the country is been politicised but we need a strong national agenda to support our youth and deal with the issue of moral decadence” he asserted. 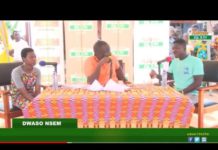 Leaked WASSCE questions were same in the exam – Group confirms