A gun battle between suspected armed robbers and a police patrol team on Tuesday night at Santasi, a suburb of Kumasi, led to the death of two of the robbers.

A police officer who sustained gunshot wounds in the battle is said to be in stable condition at a hospital in Kumasi.

The other suspects who are believed to have sustained injuries, however, managed to escape with the police on the lookout for them.

Deputy Commissioner of Police (DCOP) Mr David Agyeman Adjem, Deputy Ashanti Regional Police Commander told journalists in Kumasi that, Police intelligence indicated that the suspects were members of a gang who had been snatching vehicles from their owners in the Kumasi metropolis.

He said the robbers are believed to be behind recent attacks on a gold dealer and the murder of innocent citizens of Manso-Dadease in the Amansie South District.

DCOP Adjem said upon intelligence that the group were preparing to embark on another robbery expedition, the Regional Police command dispatched officers to trail them.

He said the officers saw a black BMW saloon car occupied by about six people in the Santasi area.

DCOP Adjem said when the suspects saw the police they opened fire in an attempt to escape but the officers responded, resulting into the death of two of the suspects, while a police officer also sustained gunshot wounds.

He said the officer who sustained injuries in the process was rushed to the hospital.

He said the other suspects who were believed to have sustained some gunshot wounds abandoned the vehicle and escaped.

The Deputy Regional Commander said the police suspected the gang to be Fulani armed robbers who masterminded the Manso-Dadease robbery, where three persons including the driver of Amansie South District Chief Executive were murdered.

The bodies had since been deposited at the Komfo Anokye Teaching Hospital morgue awaiting identification and autopsy.

DCOP Adjem appealed to all medical facilities and herbal centers to be on the look-out and report any person or persons who visits their facilities with wounds suspected to be gunshots. 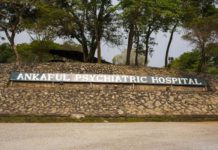