After an exciting 14-week journey, the grand finale of Adom TV‘s The Big Talent Show has been scheduled for December 26, 2021 at the Fadama Park in Accra – with only six contestants remaining.

These contestants were able to garner enough votes both from the judges and fans to propel them to the final stage where the ultimate winner and runners-up will be adjudged.

Rappers Guru and Kofi Mole are equally set to thrill fans who will mark it on their calendar to be present at the Fadama Park on Sunday.

Meanwhile, Shatta Wifi opened up the competition during last week’s performance ahead of the grand finale. He performed Kuami Eugene’s Open Gate that won him massive props from the judges.

Size Two came through as an MC pivoting a wedding ceremony. His energy was high but it didn’t win the hearts of judges, especially Clemento Suarez.

Faith Power electrified the fans with his usual acrobatic gestures but this time, he took it to a whole new level. Playing with fire and spinning pans to amuse the crowd was an exceptional one for the flexible contestant Faith Power.

Tapoli took the role of a linguist who chanced on a secret relationship of his king and his underage girlfriend.

Fans are expected to turn up in their numbers on Sunday, December 26, 2021, as your favourite TV station Adom TV entertains viewers to the finale of the groundbreaking show that has been trending over the past 14 weeks at Fadama Park. 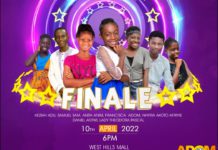