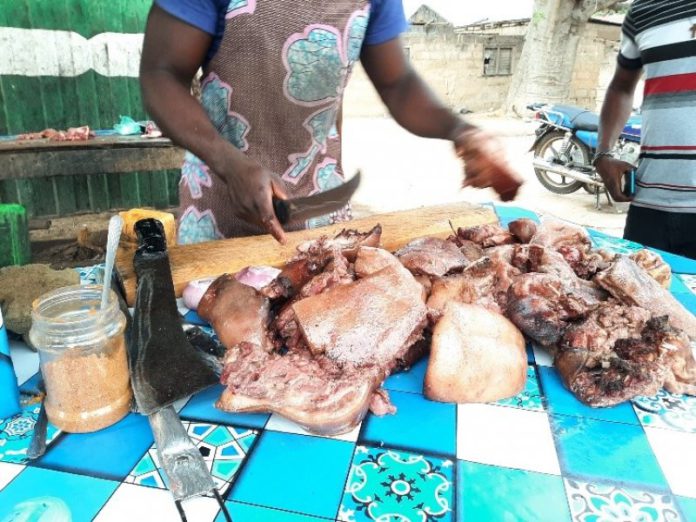 Pork prices are up in the Navrongo Township, following shortage of pigs in the Kassena-Nankana Municipality in the Upper East Region.

Some owners of pork joints have to shut down their businesses in Navrongo, which is a central point of convergence of people from the Region.

The scarcity of pigs in the area was attributed to suspected swine flu, which killed most of the pigs last year.

The Ghana News Agency (GNA) at Navrongo observed that only one pork joint operator out of eight operators on the major road leading to the Navrongo Township had opened.

Pork is a delicacy of most residents of Navrongo and beyond, some lovers of pork in the Bolgatanga Municipality travel to Navrongo to enjoy the meat, especially on weekends and on Navrongo market days.

At the ‘Jacob Shabo’s Special Pork Joint,’ the owner, Mr Jacob Shabo, told the GNA that the pigs were very scarce.

“I went far today before I got some pigs to buy. The pigs are very scarce these days.”

He said the increasing demand vis-à-vis the low supply led to a price hike, adding that patronage was very high.

“My customers do not complain about the price. The demand is even high this time that we don’t get the pigs.”

“Local prices are very high. I used to buy up to 20 pigs but now I am not able to get up to that,” he said.

When the GNA contacted Dr Felix Oduro, the Kassena-Nankana Municipal Veterinary Officer, he confirmed that the population of pigs in the Municipality had reduced.

Though Dr Oduro could not provide the total number of pigs in the area, he said many pork joints were not operating.

“If you check the slaughter points, most of them have abandoned their businesses, so we realised that they are not getting the pigs, that is why most of them are not in business now,” Dr Oduro said.

Dr Oduro indicated that there were some pig mortalities within the Municipality, and based on complaints by pig farmers, they suspected African swine fever.

He said most of the farmers reported late and the carcasses were usually not available for investigations to ascertain the cause of death.

The Municipal Veterinary Officer said most of the pigs were on free range, “So when one pig is infected, there is a likelihood that others will be infected.”

“Definitely, when you get to hear some of these things, you are tempted to say it is swine flu, which has accounted for the shortage of pigs even though there may be some minor causes that might have caused their mortality.”

Dr Oduro advised livestock farmers in the area to report any abnormality they observed in their animals to the Veterinary Office for the appropriate action to be taken.