Tyrone Iras Marhguy, the second Rastafarian student denied admission by Achimota School, has arrived at the school to go through his admission process.

This follows the admission of his co-Rasta student, Oheneba Kwaku Nkrabea on Thursday, June 3, 2021.

The students, Tyrone Marhguy and Oheneba Kwaku Nkrabea, sued the school’s Board of Governors, the Minister of Education, Ghana Education Service and the Attorney General to enforce their fundamental Human Rights.

The court, presided over Justice Gifty Agyei Addo, on Monday, ruled that the fundamental human rights of the two students cannot be limited by the rules in question.

Master Marhguy, who has declared his intentions to pursue General Science, had earlier revealed he is done with part of the syllabus.

He disclosed on Asempa FM’s Ekosii Sen that he downloaded the syllabus and online notes to help him study on his own while waiting for the court’s ruling.

Ghanaians have reacted massively to his photos which have gone viral on social media. 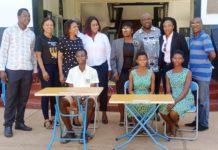