According to the former Lynx signee, born Vera Hamenoo-Kpeda, she will choose KiDi over Kuami Eugene any day when the option presents itself.

She disclosed this while speaking in an interview on Accra-based Okay FM.

To MzVee, her comments are not to present KiDi as superior over Eugene, but because she has a rapport with the former.

“I will choose KiDi because I have known him longer than Eugene, have a song with him and have a rapport with him.

“For Eugene, we were just beginning to build our relationship when I parted ways with Lynx,” she defended her choice. 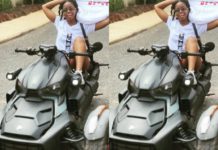