Singer Deborah Owusu-Bonsu aka Sister Derby has revealed that her first career choice was to become a marine biologist.

The affable celebrity said that dream was never to be because her father had other ideas.

She told Jay Foley on the ‘Prime Morning show that right after high school, she wanted to go to the United States to pursue a career to become a marine biologist.

“But I couldn’t go anymore, because my father wanted me to go to school in Ghana, so even though I got the visa and school, I ended up going to Kwame Nkrumah University of Science and Technology (KNUST) where I did publishing studies.

“That was a hard choice because I didn’t have an art background. I wanted to do visual art in KNUST but they said because of my science background, the only thing I could do in the department of art could be publishing studies,” she said.

Known as ‘The African Mermaid,’ she is known for being a part-time artist and someone who plays a key role in the modeling industry in Africa.

The Prime Morning Show runs on Joy Prime on weekdays from 6:am. 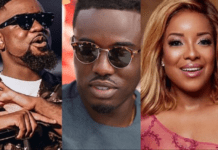