Lucky revealed the release of the song in an interview with Adom News, saying it will good for Ghanaians retain President Nana Addo Dankwa Akufo-Addo.

I always support the party that can develop the country well with my songs. I am asking Ghanaians to give Nana Addo another 4 years to complete his projects, he said.

According to the Aduu Sumo Akwadu hitmaker, there is no need to compare former President Mahama’s 8 years in power to that of Nana Addo.

I can see others comparing his 4-year tenure to the 8 years of some past leaders and that is not fair. The title of the song is ‘Nana Toaso’. I have another one for the GAs called ‘Asha Wale’ among other songs I am yet to release. 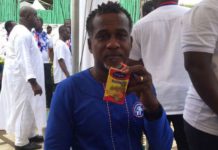 No Turning Back From NPP – Lucky Mensah