Fast-rising singer Kwam B has released his much-anticipated song titled ‘Baby’. The singer recruited former militant, Joint 77 and rapper Tulenkey on the song.

The song is a love song that talks about a young gentle professing his love to a beautiful lady who he describes as his ‘Baby’.

Joint 77’s added a different vibe on the song which brought some dynamism to the table. Tulenkey dropped some hot rap bars to make the song complete.

Speaking in an interview with Andy Dosty on Hitz Fm’s Daybreak Hitz, Kwam B shared how he got these two talented musicians on the song.

“They heard the reception that the song was receiving, and then we had a mutual conversation. I have someone here in Ghana that was able to link us up. It was all organic. Everything came naturally. As soon as I heard their verse on the song, which I loved. I wouldn’t say it was difficult at all.”

He also shared why he decided to put them on his song.

“I like to experiment a lot. Their sound is different and try different things. Joint has his own style, Tulenkey also has his own style and I think they are both talented. I just knew it will turn out well if I put both of them on the song.”

Born Kwame Nkansah Boakye, Kwam B, as he is more commonly known, is a writer and performer from Ghana in West Africa.

At the age of 15, Kwam B began creating and recording music, which has since become his source of enjoyment.

He also released “I’m Done,” which has gained popularity on TikTok thanks to a challenge in which women share stories about how their best friends stole their loved ones.

He is currently working on the remix of the song with one of the biggest artists and a mentor he looked up to growing up.

He is the owner of the “Kwam B” Foundation, which aids underprivileged kids and kids living with HIV. 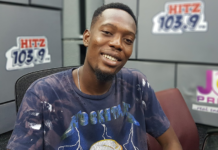