Making it clear it was his own opinion to prevent attacks on social media, CJ Biggerman named his best rappers as follows:

Asked why M.anifest couldn’t make it to the list, he simply told Prince Tsegah on Hitz FM that, “M.anifest will come if the list included a slot for the 6th position.”

According to CJ Biggerman, “I cannot say I am better than M.anifest. I only believe in myself that I am that good. It’s not just about the rap.” 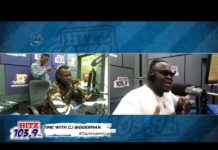