According to him, lifting the ban will elevate excitement in this year’s event because both artistes have huge numbers following them.

For pulling a gun on stage and causing a brawl between their supporters during the 20th edition of the VGMAs, Charterhouse banned both Stonebwoy and Shatta Wale from participating in the awards scheme.

Speaking in an interview on Class FM, Trigmatic noted that featuring both artistes in the 2020 VGMAs will make a difference.

“I think it would bring in some more excitement. I mean they have the numbers, it would help, I think it’ll make that difference. Music is music and it’s a celebration of music, they’ll just lift whatever ban and let them live.

Trigmatic added that: “Even if they don’t come in the categories or anything maybe a performance or something, I think that will be a solid surprise.”

The rival artistes were also banned from performing on any VGMAs stage and further stripped of the awards they won on the night of the event last year.

The confusion between the two artistes happened when the Stonebwoy was announced as the Reggae Dancehall Artiste of the Year.

Shatta Wale and his fans approached the podium to, ostensibly congratulate Stonebwoy, but events turned chaotic resulting in a lot of pushing and shoving – a situation that prompted Stonebwoy to pull a pistol.

The panic-stricken audience had to run out of the auditorium with laboured breath due to the pepper spray sprayed in the space.

Shatta Wale’s management alleged that he only went on the stage to congratulate Stonebwoy.

The two artistes, however, smoked the peace pipe later. 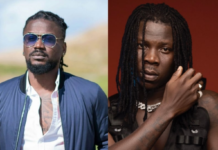