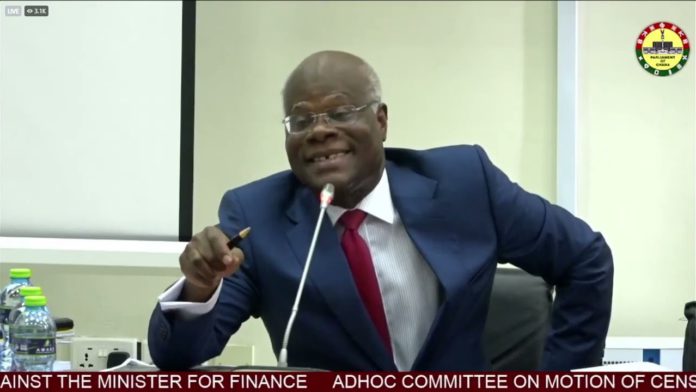 Member of Parliament for Adansi Asokwa, Kobina Tahir Hammond, is unhappy with the reportage that has circulated since the opening day of the parliamentary committee’s sitting.

The legislator is co-chairing the ad-hoc committee probing the motion of censure against Finance Minister, Ken Ofori-Atta.

According to him, events after the sitting on Tuesday, November 15 do not reflect his actual stance on issues discussed during the day.

The MP described some of the reports as inaccurate and seeking to portray him in a bad light.

Some social media comments and reports suggested that he was communicating with Gabby Otchere-Darko at that moment, portions of which had been captured on video.

But on Day 2 of the hearing, KT Hammond expressed his disappointment with the narrative, alleging that some of the videos were tweaked to fuel a false perception.

“For someone to have thought that somebody in the public gallery was in a position to influence my question on the day is atrocious and unfair, patronizing. It is insulting [to] my intelligence.”

He said the use of his mobile phone during the process was to help him recall details of a document that was sent to him days ago to aid in the committee witnesses’ confirmation.

The MP believes the reportage which he deems as deliberate and does “him outrageous injustice.”

“It was sent to me on the 6th of November, the same document… We have reputations, be very careful. I mean someone dictating to K.T. Hammond, is it fair? I mean, say all the things you say about me, they insult me a lot and all of that, that is not my business, but at least say what I said, record what I do.”

Another issue from Day 1 which the legislator finds questionable bothered on his utterance regarding fuel prices.

During the proceedings, the Minority Leader, Haruna Iddrisu suggested to K.T. Hammond that since he also buys fuel, he must be feeling the impact of the “mismanagement” he and his caucus are talking about.

However, the legislator retorted that “I don’t buy fuel. Don’t talk about me. I don’t have a car.”

But he says the reportage that followed this largely failed to highlight the supposedly satirical manner in which he made the utterance.

He said; “Joy was like K.T. Hammond said this the last time, today he is saying this, so does he or he doesn’t. That wasn’t bad. But the other papers were making emphatic statements that he is saying this. Does he or doesn’t he buy? Let us get it on record, members of Parliament buy fuel.”

According to him, the nature of reportage by some media houses has the potential to mar his reputation and does not take them lightly.

“Sometimes I think that it is incumbent on you to read the language of the speaker right and present it to the public,” he added.

The Speaker of Parliament, Alban Bagbin on November 10, constituted the Committee, which has seven days to submit its report.