Residents of Fiifi, a suburb of Gomoa Nyanyano, have been gripped with fear after the charred body of an unidentified man was discovered Monday morning.

The body of the man, alleged to have been murdered, was discovered along a walkway by some residents.

He was lying in a prone position, believed to be wearing only a peach t-shirt as at the time he was lit in flames.

Car tyres were deposited on him from top to toe, and the fire was still burning even after his discovery.

The Gomoa Nyanyano Police command was called to the scene to retrieve the body.

Police say they are faced with identification challenges as the facial features of the body were tampered with by the fire.

The body has been deposited at the Police morgue awaiting investigations and autopsy.

Meanwhile, there has not been any report of a missing person as at the time of filing this report. 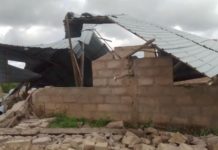 2 dead, 5 in critical condition as church building collapses at Akotsi

Charred body of 50-year-old man found in his room