The Executive Secretary to President Akufo-Addo, Nana Bediatuo Asante, has disclosed his desire to become a Gospel artiste.

The Ghanaian lawyer and consultant, in an interview with Joy Prime’s Ibrahim Ben-Bako, after entertaining patrons at the Highlife Benefit Concert held on Saturday, June 5, confirmed that he does music as a hobby.

Nana Bediatuo Asante revealed that he has written many gospel songs, some of which he may release soon.

“Recently, through a pastor friend of mine, Prophet Gideon of The Empowerment Centre, who encouraged me, I have written a lot of gospel songs. It is a genre I will want to try”.

Nana Bediatuo Asante also stated that after a hard day’s work, he likes to spend some time behind the keyboard before he takes his shower.

He, however, added that aside his love for Gospel he loves all genre of music. 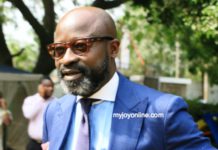