Ghanaian actress, Amma Serwaa, has confessed that women experience a certain feeling of guilt after using sex toys to please themselves sexually.

In an interview on eTV Ghana, Amma Serwaa said: “After you use a sex toy to please yourself, you feel guilty. Even though you feel okay and sexually satisfied, you still feel guilty and you start wondering if what you just did was wrong or not”.

She explained that the guilt is simply because the woman did the act alone and not with a man. “One may argue that using a sex toy is a sin but so is having sex if you’re not married, so I’m only saying that if you’re committing the sin of using a sex toy, it’s better to do it with your man in order not to endure the guilt after doing it alone,” she said.

She noted that when a lady has sexual intercourse with a man or allows her man to use sex toys on her, she does not get that feeling of guilt because she gets to cuddle and talk to the man which helps to get her mind off.

“When she self-pleases herself with sex toys, she is left by herself after reaching orgasm and since there is no one to talk to, she automatically finds herself thinking about what she just did,” she said.

Amma Serwaa stated that sex toys help couples to better their sex lives, however, just like everything else, too much of it can be bad. 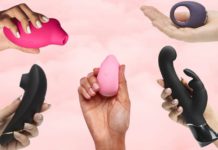