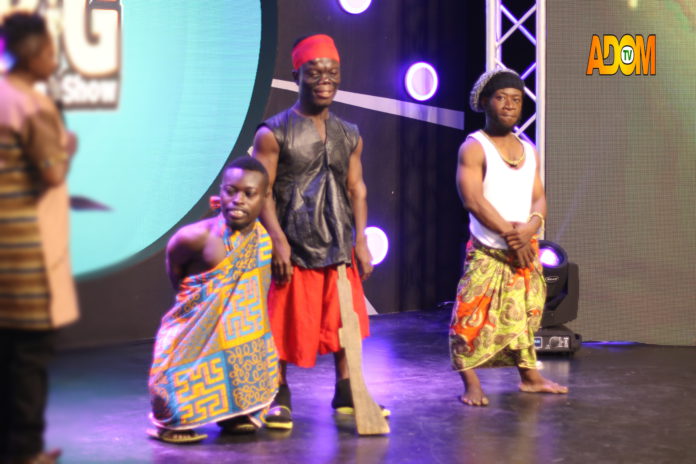 Contestants Fred, Paul Gee and King Solomon failed to make it to the next stage in Week 4 of Adom TV’s reality programme dubbed The Big Talent Show.

The three have entertained fans to the core since the inception of the entertainment programme but fate and luck eluded them as their votes were not enough to propel them forward.

Meanwhile, last Sunday, fans witnessed performances from most of the contestants who were determined to avoid eviction.

Short Prophet opened up the show this week with a gospel performance. His rendition of traditional gospel songs from the Volta Region got people dancing and rejoicing.  His stagecraft and energetic performance wowed the judges. He was also lauded for his costume.

Nana Yaw did a native cultural dance from the Northern Region of Ghana dubbed Tigari. The judges loved his performance and urged him to be versatile.

Shatta Wifi imitated King Ayisoba by performing his I want To See My Father song that shot him to fame. Shatta Wifi showed his seriousness by further playing the kologo, a traditional Ghanaian instrument.

Bie Gya took to acting this week. She played an old ‘Fante’ lady who intercepted a conversation between two people trying to cook up a date.

C-Nortey tightened the championship gap with his creative dancing drama. It worked for him last week and this time around he played a doctor who had a Covid-19 patient brought to him for treatment. What triggered the audience and judges were the size of his syringes – too huge.

Paul Gee didn’t really impress the judges and he was urged to up his creative game. His Covid-19 play didn’t go well as his facts were contrary to what Coronavirus is about.

Fred changed his style this week by emulating a warrior in the Ashanti Kingdom but it wasn’t much to intrigue the judges.

Size Two was lauded for his fake prophet performance but Judge Clemento Suarez wasn’t impressed with the content. He praised him for his stagecraft but insisted it wasn’t enough to generate a compelling showdown.

Martha performed Adani Best’s Maafio hit song where she spiced it up with a background performance. It took her through the eviction stage regardless.

Faith Power has since been one of the promising fans in The Big Talent Show. His acrobatic moves keep surprising the judges and those who support him. Akumaa Mama Zimba opened up on how he fascinates her with her unpredicted performances.

King Solomon took the show to Volta Region with his traditional Agbadza dance. Agbadza is an Ewe music and dance that evolved from the times of war into a very popular recreational dance.

Kumawood actor Tapoli was a carpenter this week. His attempt to sell a coffin with an air-conditioner to a Muslim man proved futile.

Ankaa Baako took on instrumentals of defunct music group Akyeame’s Mesa Aba song and laid it down with his own lyrics. It saved him from being evicted.

Other photos from the night: 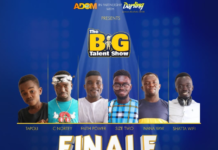