A Policewoman has been crushed to death while on duty at the Gomoa Potsin checkpoint in the Central Region.

The deceased, identified as Comfort Freby, was stationed at the Gomoa Dominase Police Command and got married barely a year ago.

Police sources indicate the incident occurred at about 3:00 am on Wednesday while she was with other colleagues.

The suspect driver was reportedly driving a Toyota Fish passenger car with a registration number GS 4746-20 on top speed.

The driver, who was travelling from Accra to Cape Coast, is said to have driven through a first checkpoint despite attempts by the patrol team to stop him.

A signal, according to information gathered by Adom News‘ Kofi Adjei, was then sent to the deceased and her colleagues who were at the checkpoint ahead to be on the lookout for the driver.

However, he repeated his act and is said to have almost crashed the entire team to death but they narrowly escaped him.

Unfortunately, the vehicle veered towards where the policewoman was and killed her on the spot.

Meanwhile, the suspect driver is in police custody assisting investigations while the police have visited the bereaved family to commiserate with them.

The Inspector-General of Police, Dr George Akuffo Dampare, is expected to be in the area later in the day to extend his condolences.

The checkpoint was constructed just last week after series of robbery cases recorded on the Kasoa Apam Highway. 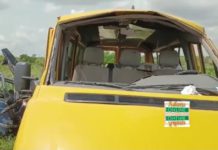 One dead, four others injured as bus hits cow at Gomoa Potsin [Video]