Political Scientist, Professor Ransford Gyampo, has stated that only ‘responsible and successful’ people must be given political appointments.

To him, ministers of state and Members of Parliament (MPs) must own personal property before being considered for such positions.

“Property should be one of the requirements that will have to be considered in determining who must be given a political appointment,” he suggested.

According to him, some government officials contribute nothing to governance and national development yet they enjoy numerous incentives.

“When interacting with some of these government officials, you realise the contribution to governance and development will be zero. But they enjoy a lot of privileges kind courtesy of the constitution,” he said.

Speaking in an interview on Adom TV’s Badwam Show, he claimed that politicians do not demonstrate any form of patriotism.

He advised politicians to lead by example.

Why Special Prosecutor has been unsuccessful in corruption fight – Prof Gyampo

“These strikes that we embark on that you all mostly don’t understand, it all points out to the lack of patriotism on the part of leadership.

“If leadership has not sacrificed, how do you expect others to sacrifice? Has there been any leader who has decided to serve and leave a legacy without taking a penny from the country’s coffers?” he quizzed. 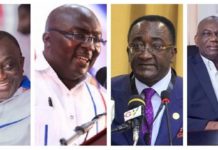