Personnel from the Ghana Police Service lightened up the spirits of mourners at the one-week celebration of their colleague, General Constable Emmanuel Osei.

They trooped to the funeral grounds in their numbers clad in their uniforms at the Millennium City.

Despite being drowned in sorrow over the absence of Mr Osei, they held a Jama session in his honour.

Men and women in the service were spotted singing their hearts out to the delight of mourners as they parade the funeral grounds with their flag.

The police officer and one other were killed in the daylight bullion van robbery at Adedenpo near James Town on Monday, June 14, 2021.

General Constable Osei was with the national SWAT unit with the service number 58449.

The onlooker, Afua Badu aged about 40, according to a police spot enquiry, was pursued and shot for raising an alarm. 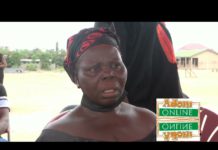