A man in a military uniform, Mustapha Yussif and four other colleagues have been arrested at Yapei -Kintampo for highway robbery

Per a police situational report, the five suspects snatched a Toyota Camry and other items from one Adam Abdul-Gafaru at gunpoint in Tamale.

The activities of the suspects were traced by a tracking machine which alerted that they were heading towards Buipe direction.

Based on this, the Buipe highway patrol team on duty at Sawaba checkpoint launched an attack, intercepted and arrested the occupants of the snatched and robbery vehicle with registration numbers AS8445-19 and GX6923-20.

The victim has been identified as the brother of Chairman for the Justice and Security Subcommittee of Savelugu Municipal Assembly, Iddrisu Nurudeen. 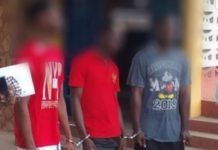