The New Patriotic Party (NPP) has been challenged to hold a public debate for members seeking to contest the flagbearership race ahead of the 2024 election.

According to a Senior Political Science Lecturer at the University of Ghana (Legon), Professor Ransford Gyampo, this will let party faithful and Ghanaians entirely know what these aspirants bring to the table.

He made the proposal on Adom TV’s Badwam, stating politics is a contest of ideas.

“I have interacted with them and some have superior ideas. Most of them were with President Akufo-Addo only in the physical but they had varied views on how things had to be done.

“So I will propose that given the serious ideas they have, there must be an internal flagbearership debate on how they are going to fare this will help us get a sense of who is who and can lead,” he said.

Many have also tipped Vice President Dr Mahamudu Bawumia for the position but he is yet to officially make his intentions known.

Mr Kyerematen, who said he believes he will be a transformational leader, and Dr Owusu Afriyie last week resigned from their respective positions to nurse their ambitions.

But Prof Gyampo said he believes all the aspirants have great ideas, hence the debate is the only way to determine who has superior ideas.

Alan Kyerematen opens up on relationship with Akufo-Addo

“NDC is a forgone conclusion because Mahama is their presumptive Presidential candidate and I don’t see how anyone can overturn this but the NPP, it will be keenly competitive.

“So the General Secretary should take it upon himself and create a fair level ground for them to debate on what they did and what they will do going forward, especially Akufo-Addo’s appointees and that will help us to know who can replace President Akufo-Addo,” he explained. 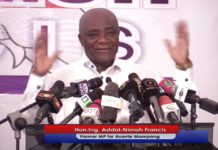