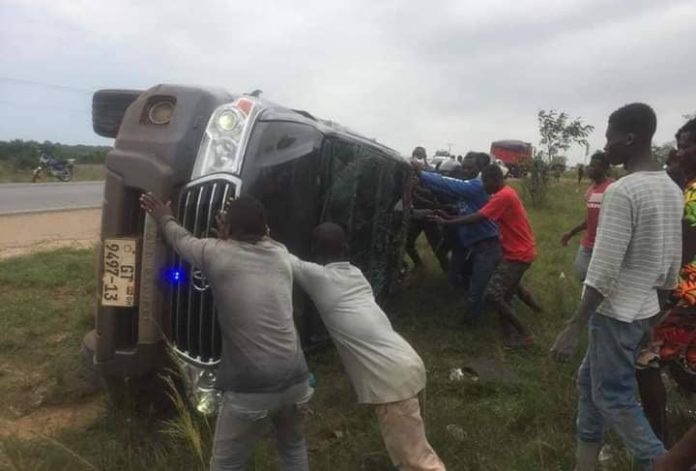 The Member of Parliament (MP) for South Dayi, Rockson Dafeamekpor, after surviving a ghastly accident, has broken his silence.

The incident occurred on Saturday, August 14, 2021, on the Aveyime Battor road in the Volta Region.

This was at a time Mr Dafeamekpor was returning from the funeral of colleague MP for North Tongu, Samuel Okudzeto Ablakwa’s father.

The MP was travelling in a Land Cruiser with registration number GT 9497-13.

Recounting the incident, Mr Dafeamekpor noted that the accident happened in a town called Dawa.

He said he was the one leading his colleagues including Ashaiman MP, Ernest Norgbey in a convoy, hence was affected.

“A KIA truck loaded with about 120 concrete blocks missed its way and packed along the road to make a call and after he was redirected, he just drove unto the highway to make a U-turn.

“So I rolled down my windows to signal my colleagues to stop while I try to park but the truck still hit me,” he narrated on Accra-based Metro TV.

According to him, the vehicle, after the hit, somersaulting and eventually landed on its roof.

He added that his seat belt saved him as it was such a horrifying scene.

“I managed to loosen my seat belt and later saw my colleague Ashaiman MP, Ernest and the others come to my rescue,” he added.