The legislator bemoaned the use of the scholarships by his fellow MPs in studying courses aimed at personal capacity building rather than courses that would help them become better legislators.

“What is the relevance of the courses they studied to their duties as MPs, what bearing did it have on their constituents? You would expect that they will be taking courses on how to become a better legislator or how to understand lawmaking so as to help pass better laws for the country but they didn’t,” he said.

“They should bow their heads in shame,” he added.

According to the lawmaker, MPs and Ministers of State who benefitted from the scholarship scheme had no business accessing them.

“They had no business accessing those scholarships but if they feel they were entitled to them, they should go to the court and challenge the Auditor General’s finding and stop issuing statements,” he stated.

He further declared his support for the Auditor-General, saying he completely sides with his findings. 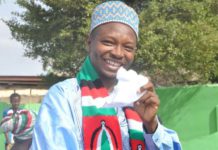