Ghanaian female comedienne and TV presenter, Afia Schwarzenegger says she was not legally married to her estranged husband, Mr Lawrence Abrokwa.
Afia and Mr Abrokwa got married at a private marriage ceremony in South Africa on Saturday, October 22, 2016, in a church at Florida Lake in Johannesburg.
Lovely photos circulated on social media showing the couple kissing each other intimately on a park and indoors.
See also: Ghanaians need to kill the mentality that songs get old – Kuami Eugene
However, the comedienne was caught in bed with another man barely 8 months into her marriage by her then husband, Mr Abrokwah, who recorded and subsequently leaked the video of the whole activity.
In the video, Afia is heard screaming and pleading for forgiveness from her husband, saying: “Abrokwah, I beg you, the loan I took for our wedding hasn’t been paid, I beg you” she pleaded.
But speaking on Daybreak Hitz on Hitz FM Wednesday, Afia Schwarzenegger has indicated that she was illegally married to Mr Lawrence Abrokwa.
Read this: Hot video: Afia Schwarzenegger descends heavily on Berla Mundi
According to her, it was brought to light by her lawyers that the marriage certificate issued to her in South African’s Home Affairs had a different date compared to the actual date the ceremony happened.
Afia told Andy Dosty that “I found out, with the help of my lawyers, that my marriage with Abrokwa was illegal. Our marriage certificate had wrong dates. We got married on October 22, 2016 but it stated it happened on November 1, 2016 which was very wrong.”
Asked if she thought Mr Abrokwa married her to defraud her, she said “let’s leave that to the court and God. I cannot say what is pending in court. It will be told in court on Tuesday.” 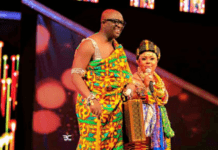 Video: ‘Ghanaians are hypocrites; we only love the dead’ – Afia Schwarzenegger

Video: I slapped someone in Dubai over Ebony – Afia Schwazeneger

Hot video: My brawl with Afia Schwarzenegger was a plot – Kumchacha

All basic schools directed to break over funeral rites of late...