A man, believed to be in his 40s, has been lynched at Sehwi Nsawora after allegedly shooting his wife at Sehwi Sika ne Asem in the Akontombra District of the Western North Region.

The man, identified as Kwame Dominic, is reported to have shot his wife during a misunderstanding on Thursday evening.

The wife, Mercy Mintah, aged 38, is said to have packed out of her husband’s house after threatening to file for a divorce.

However, on her way to the family house, the deceased allegedly ambushed and shot her to death midway her journey.

After committing the heinous crime, he fled the scene but was apprehended at Nsawora where he was beaten to pulp, leading to his death.

The Unit Committee Chairman, who is also a son of the deceased, Prince Bannor, narrated the incident in an interview with Adom News‘ Augustine Boah.

Meanwhile, the chief of Sehwi Sika Ne Asem, Nana Kwao Esiafam, said the entire community was in shock after hearing the sad incident.

Describing it as alien, he revealed rituals would be performed to purify the area.

The corpses have since been deposited at the Wiawso Government Hospital mortuary by the police. 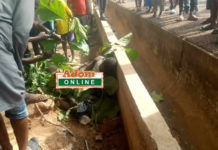 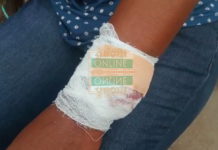