According to the police, the alleged land guards targeted carpenters and motor riders who operate and inflicted cutlass and gun wounds on them.

Police say they connived with some hospital staff to feign assault with plasters and bandages as though they were rather the victims.

In an interview with Adom News, Zinabu Yusifu , wife to the one of the victims, who is receiving treatment at the Winneba Trauma and Specialist Hospital, called on the Inspector-General of Police to come to her aid.

According to her, the leader of the land guards has inflicted cutlass wounds on the husband.

Some of the motor riders and masons claimed they were leaving in fear in the vicinity due to the activities of land guards.

The Odikro of Gomoa Tuansah, Nana kwao Obrendu, said his outfit had written several petitions to Kasoa and Bereku police but nothing has been done to calm the situation.

Chief shot dead, three others in critical condition over land 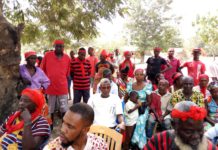