Kumawood actress, Joyce Boakye, has clashed with a fetish priest who reportedly threatened to invoke curses on her.

In a video that has gone viral, the disgruntled actress was captured in a heated argument with the fetish priest whose identity is not immediately known.

The fetish priest, who had a white cloth around his waist, holding a Schnapp-like bottle, is believed to have stormed the actress’ house.

He had applied a powder on his bare-chest as he walks around the house.

However, the actress, who could not endure his actions, quoted parts of the Bible and invoked the blood of Jesus on him.

Amid prayers, she rebuked the fetish priest, adding that he will change from his ways and dedicate his life to Jesus.

The confrontation drew the attention of co-tenants whose efforts to calm the actress down proved futile.

Reports indicate Miss Boakye’s support for Ghanaian singer, Mzbel over an issue sometime ago triggered the action of the fetish priest.

However, it was not clear on whose behalf the man confronted the actress. 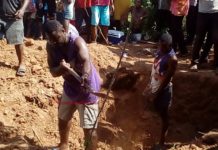 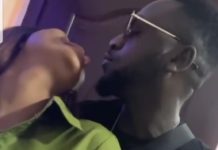