Former British High Commissioner to Ghana, Jon Benjamin, has stirred laughter on social media with his reaction to former President John Mahama‘s do or die comment.

Despite the controversies sparked in the last 48 hours, Mr Benjamin decided to give a hilarious twist to it.

In his reaction, he made reference to the National Democratic Congress Parliamentary Candidate for Ayawaso West Wuogon in the 2020 election, John Dumelo’s I dey for you slogan.

He asked: @johndumelo1 – my friend, have you patented the slogan “I Dey Do Or Die 4 U” yet?

In response, Mr Dumelo said he was yet to change it, adding he might include Spanish.

He wrote: Ahhhhh not yet!!! But soon…I might add some Spanish to it.

Ahhhhh not yet!!! But soon…I might add some spanish to it https://t.co/1hx4vXrRTp

The comments of the duo have generated hilarious comments from tweeps who have chanced on it.

LIVING IN GHANA UNDER THIS PRESENT GOVERNMENT IS A DO or DIE AFFAIRS. 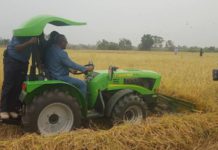