Months after going on a hiatus from the entertainment space, Moesha says it feels better to be back on the digital platform where she has amassed over 2.8 million followers.

According to Moesha Boduong, who has since not visited a salon per her looks, she is willing to talk about whatever happened to her that caused her disappearance.

In a video where she asked her followers to pardon her excessive chin hair, Moesha denied rumours circulating that she is mentally retarded.

She explained that she has received many phone calls from her friends and some loved ones, adding that, they are worried about her mental health.

So many people are calling my family thinking I’m crazy. I’m not crazy… I’m just a new person and you guys are going to love the new me and everyone is going to visit me at my house.

Moesha, meanwhile, confirmed that she is going back to her previous house, adding that, she would love to change her current car.

Her subsequent prayer was asking God to give her the strength against all the temptations battling her.

I’m going back to my house. It feels so good to be back on social media and I can’t wait to tell the world about what happened to me and I pray God finds me the strength to overcome all the temptations.

May God bless me so I can change my car because I am tired of driving this car and I need a new Lexus jeep. 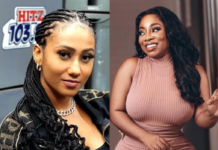